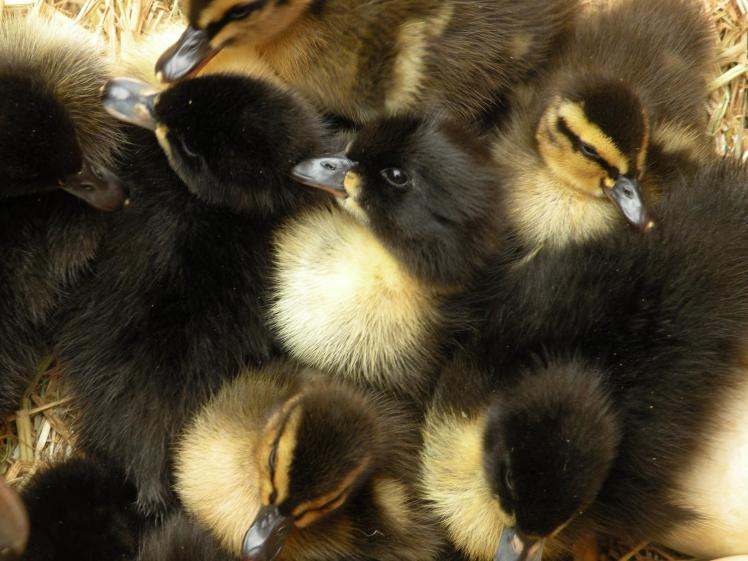 I adopted my first duckling nearly twenty  years ago. He was a downy angel, fitting quite  easily  in the palm of my  hand. A salesperson, at my local feed store, explained that the little  fellow was a Muscovy. He then went on to describe, in somewhat gory detail, how the peep would  grow up to be a large duck, eventually  becoming both mean and ugly.  I imagine that he simply meant to warn me, a newbie in the world of poultry, about the dangerous path that  I was about to embark upon.  I took his advice with a grain of salt. You see, nothing would dissuade me from adopting my new baby. Nothing. It was love at first sight.  I intended to raise him with love and patience. My duckling  would never exhibit any of the terrible qualities that had been foretold. And as far as his looks were concerned, well,  beauty is in the eye of the beholder. 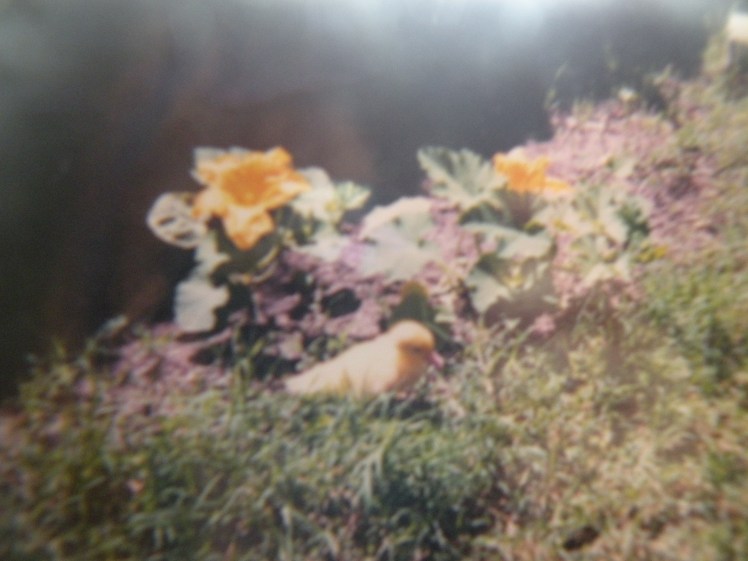 Happily, my new charge  bonded with me within the first hour.  He began following close at heel, peeping frantically when he lost site of his newly adopted mother. He chased my elderly cats, took baths in the water bowl, much to their horror,  and basically took over my house. I named the duckling, Cosette, a character from the novel, Les Misérables. How did I know the fuzzy darling was a girl? My vet told me so. But alas… he was wrong. It turned out that Cosette was indeed a boy. So I eventually changed his name to  Cozy. Sound familiar? It happens to  belongs to one of the characters from my  paranormal novel, The Wall People.

But let’s go back to the story of Cozy the Duckling. I should probably mention that ducks make very messy house pets. Birds can never be properly potty trained. And he was too small to leave unattended in the backyard. So I kept him indoors most of the day. I covered my floors with towels and newspapers, anything that would keep them protected from his frequent messes. But I drew the line at putting down straw in the house. That’s just crazy. Sadly, duck diapers were unheard of in those days. My time was now  spent cleaning up after him, trying to pacify my cats,  and mopping down the floors and furniture from his frequent baths and accidents.

In spite of my ignorance concerning duckling care, he managed to survive and thrive in his new environment. I wasn’t  aware of his need for a heat lamp, proper nutrition, or other items necessary for a growing bird. I had also unintentionally placed him in harm’s way concerning my two house cats. Luckily, they left him alone for the most part. Pyewacket and Bongie were great pets. I eventually began to research duck care and soon realized that I’d made every mistake imaginable. Cozy should have been eating poultry feed suitable for ducklings. One of my favorites is Purina Flock-Raiser.The crumble version is perfect for tiny bills.

Another great brand is Mazuri Waterfowl Maintenance. Adult ducks really seem to enjoy this feed. The pellets float in water. You can toss the grains into their pool or pond. Birds really love dabbling for their meals. It’s like bobbing for apples. The larger bags can be a little pricey. But it’s  made from the finest ingredients.

Note: These grains should be supplemented with leafy greens. Romaine lettuces, spinach, and  Swiss chard  are all excellent choices. Crushed oyster shells, placed in a separate container, should be provided for laying hens. This will  help with egg development.  A pinch of brewer’s yeast, can also be added to their  food, usually a five percent ration. The added niacin is very important for growing birds.*

I had originally been instructed to feed Cozy chicken scratch. This advice was given by the same gentleman that predicted my duckling would become mean and ugly. He insisted that this would be an adequate food source for my pet. I soon discovered that  chicken scratch lacks essential vitamins and minerals needed for waterfowl.  It was another lesson learned. It’s incredibly  important to do your own research regarding pet care. I can’t stress this enough.

Because of his inadequate diet, my growing boy soon took  to hunting down wasps and bees in the backyard. He was surprisingly quick, moving with lightning speed,  gobbling up the insects stinger and all! It was a little terrifying at times. Sometimes I’d imagine him as a  bit larger, hunting prey, moving from side to side, a predator in the making.  Velociraptors often came to mind as I watched him hunt.  They were seriously on to something in the movie, Jurassic Park.  There’s no doubt that birds are descended from dinosaurs. Just watch a flock of chickens chase down a lizard or snail… and you’ll know for sure. They really are just tiny dinosaurs with wings.

*Zhenyuanlong suni, a relative of the velociraptor, was five foot long and had feathers. Photo: Chuang Zhao/University of Edinburgh*

Well, once I realized my many  errors in judgement, I promised myself to never make the same mistakes regarding future pets. I vowed to research before adopting another animal. I was simply lucky that my duckling survived.  I went to my local library and checked out every book I could on find on the subject of poultry care.

One book stands out in my memory: Storey’s Guide to Raising Ducks. It was very helpful in gathering all of the proper information concerning duck care.

I also studied articles online. I discovered that my duck needed poultry crumbles. These are easily digested by younger birds. My pet was now too large for a heat lamp. Cozy was covered from head to toe with soft white feathers. He was also developing a mask of red caruncles on his face. I believed them to be quite lovely. They reminded me of  colorful beauty marks. I continued to keep him in my bedroom at night,wrapped in blankets, snuggled down in a laundry basket. This arrangement lasted for about two months. One evening, as I was drifting off to sleep, my peace was unexpectedly shattered by the furious sound of beating wings.

My duck, now a large adolescent drake, had landed on my back, and busily went to work biting my head. He was apparently not a fan of stormy weather. This was unfortunate since The El Niño rains had recently made their way to my neighborhood. It was the last week of October, 1999. Storms were playing havoc all over the Bay Area, particularly in the town of Petaluma, where we once resided. My yard was basically a muddy swamp.  Flooding was now an everyday occurrence.

So Cozy’s night adventures forced me to change his living arrangements. I relocated him to my laundry room for the winter. I placed a baby gate across the entry way. It didn’t take long for him to figure out how to escape. He was flying by this time. It was not an uncommon occurence to see him soaring through the house. Visitors were often startled, if not terrified, by his sudden appearance.

In November, his hormones began to kick in.  Ignorant that he needed a mate, I became the victim of his frustrated advances, painful bites to my ankles, and frequent temper tantrums. Sadly, I was not the only victim of his unwanted attention.  My best friend, and roommate at the time, Maria, was often the target of his affection.  He was very fond of stealing over to her room in the wee hours of the  morning, persistently pecking at her bedroom door, tapping repeatedly…without mercy. It was reminiscent an Edgar Allen Poe tale.

“Much I marvelled this ungainly fowl to hear discourse so plainly,
Though its answer little meaning- little relevancy bore;
For we cannot help agreeing that no living human being
Ever yet was blessed with seeing bird above his chamber door-
Bird or beast upon the sculptured bust above his chamber door,
With such name as “Nevermore”

It’s a miracle our friendship survived this challenging period of time.

It was difficult to deny that my little boy had developed a bit of an attitude problem. He’d become extremely territorial, defending his backyard against intruders, basically anyone that dared to come too close. And Cozy had a special prejudice against men, much to my future husband’s dismay, and an unhealthy obsession with the local UPS man. The postal carrier would soon learn to drop all  packages over the fence, rushing back to his vehicle as fast as he could. You see, he’d made the mistake of entering my yard one morning. I can still hear his screams as of my duck  chased him down the street, biting his calves as he fled. Poor fellow. I can’t blame him for his terror. He should have been frightened.

By this time, Cozy had developed razor-sharp talons. His beak was hooked, capable of leaving impressive bruises and cuts. These features are advantageous in the bird’s natural habitat of South America. They are known to perch high up in the banana trees, safe from predators.

*Note: Muscovies are actually not considered to be true ducks. They are more closely related to swans. With the exception of Muscovies, all other ducks are derived from Mallards. If you cross the two breeds, you’ll end up with offspring that are unable to reproduce. They are known as “mules.”

Well, we had many adventures, the two of us. But I could tell that my duck was yearning for something more. So I eventually added a Pekin drake to the family. The poor boy, Chandler, patiently withstood  Cozy’s unwanted advances.  I would realize, many years later,the fact that Muscovy drakes are best kept with female ducks. This will alleviate much of their inappropriate behavior. You will want to make sure to collect all of their eggs. Muscovy ducks can hatch out huge broods, sometimes thirty ducklings at a time!

We had many good years together. Cozy  lived to the ripe old age of eleven. When he passed away, my heart was broken.  I just couldn’t  imagine having ducks in my future. After all, how could anyone compare to my special boy?

Little did I know this couldn’t have been further from the truth. My husband and I would eventually adopt several Muscovy ducklings for our new farm, Sock Monkey Ranch. They all grew to be handsome gentleman and pretty ladies. My current ducks display unique and interesting personalities.

Delilah, John Boy, Jim Bob, Hillbilly, and Barnaby are all part of my new Muscovy family. They never bite and seldom have temper tantrums.  The hens help keep the peace. And they have yet to chase down the UPS man….as far as I know.  My flock has plenty of land to roam about, places to explore, and a nice coop to snuggle down in at night. A few of our birds prefer to roost on the shelves inside our garage. They follow me around the yard, hissing and panting, as Muscovies prefer to do. Sometimes, when I watch them roaming the fields in the morning, I  think of Cozy and imagine how much he’d enjoy the ranch, especially the pretty hens.  The flock fancies heading back home at dusk, I see them appearing in a blanket of mist, a blur of glossy feathers.- Muscovies in the Mist. 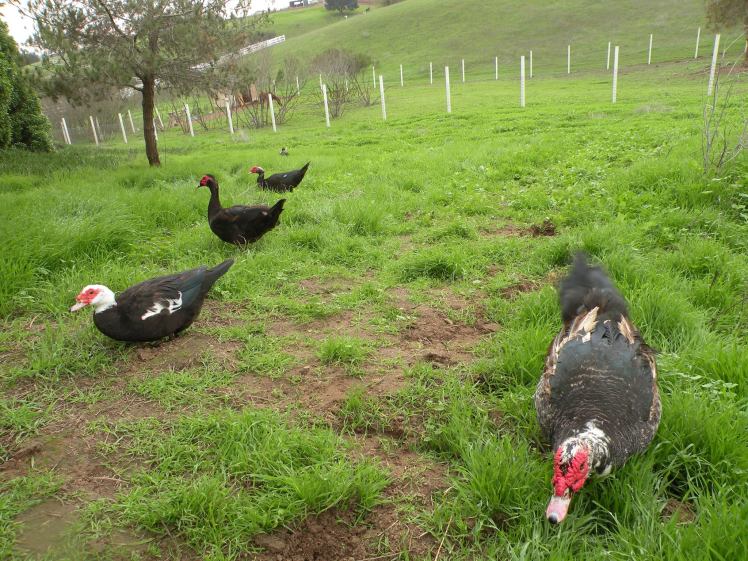 2 thoughts on “Muscovies in the Mist”